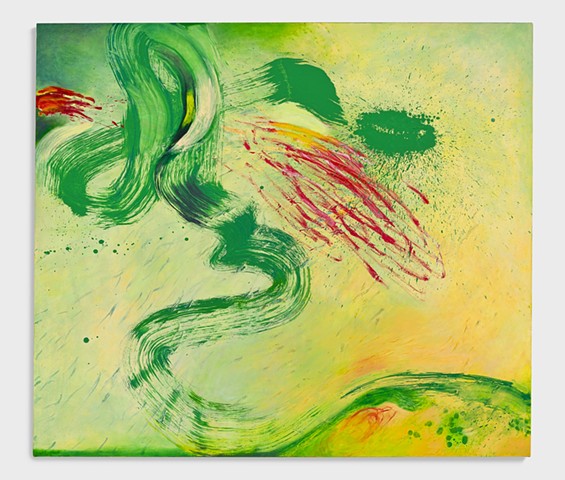 It happened again. The world turned, the ice melted, the sun came back and all sorts of things that looked dead turned out to be only waiting for the right context. My rational mind knows that Spring is inevitable but, every year, my heart is not so sure. Most years I need to make a painting about my amazement at this ancient rebirth, it's too big to just think about it in my head. This years Vernal Equinox painting was based on the following dream:

I was looking for a dragon hole. I was wandering in the woods in the cold grim time between seasons when the whole world feels as if it were made of mud, flint and things that died last year. I was looking desperately for evidence that dragons actually exist-- a burrow hole and a footprint were the best I hoped to find. I wasn't asking so much was I? Just a mark on the earth that there was a real dragon somewhere and it had passed by.... I looked all day and the dark was closing in and I had found nothing. But when I turned to go home, there!, in what had been raw air a moment before!, was an opening. The opening went right into another dimension and it was filled with dragon. The dragon was a beautiful shimmering green and it was so big that I could see neither the head nor the tail, just the body of it flowing by like a wild river with the all dangerous thrust of a freight train. OH NO! I hadn't asked for the dragon itself and I wasn't prepared for it. (Is one ever prepared for a dragon?) I had found way more that I was looking for, I was not at all sure I was up to it. "Run!" screamed my sense of self preservation. But it was so beautiful, I could not run. I longed to touch it. (when you were a kid did you ever stand next to a train going by at full speed and reach out and touch it just for the power rush? I did.), I wanted more than anything to reach out to that shimmering green power flow, but I knew that (unlike a train) it was a conscious being and if I touched it, it would know I was there and it would turn and then....And then what? I didn't know. Would life as I knew it be over? I stood there trembling and entranced, unable to decide to touch it and unable to decide not to.

The dream ended there.

Sometimes our dreams are trying to tell us something that our deeper minds have seen, but which cannot be contained by our conscious ideas or our official "reality structure." The very best place I know to learn about dreams is here: http://www.lifetreks.com/ This website will speak of dreams and their meanings more eloquently than I can. I will only say that my dream was important to me and that it had to do with the sheer power of life and how you cannot see where it comes from (the tail) or where it is going( the head) and that the dream, (along with the Colorado River which I saw for the first time this spring, but that is another story) provided the imagery for my annual Spring meditation painting.

Cheers, Namaste, Sincerely Yours, all of the above