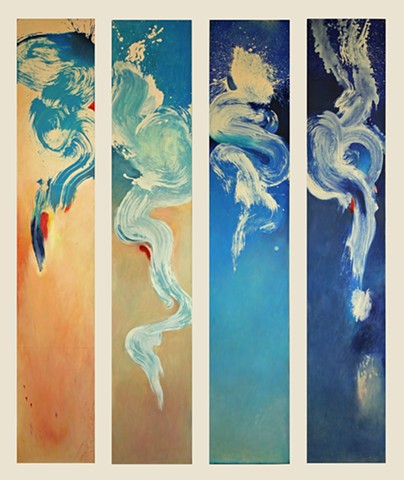 I have been thinking about Escape Velocity lately.

In physics, escape velocity is "the speed at which the the sum of an object's kinetic energy and its gravitational potential energy is equal to zero.[which sounds kinda zen to me] It is the speed needed to 'break free' from the gravitational attraction of a massive body."

I have lived for more than half a century now, and my past is starting to feel like a massive body. But what is a past? The past isn't here. It is only the remaining physical traces of cause and effect and a configuration of the mind. Personally, functionally, the past is what I remember.

But memory is seriously tricky. My cousin is a lawyer and professor of law, very used to the questions of accurate reporting of what happened. He was involved in a 4-car pile up on a freeway once and as the 4th car, he really had nothing to do with the originating accident. He was just an innocent not-quite-bystander. He told his story to the police at the time, clearly. Several months later, at the trial, my cousin, who is an overly responsible first born son had, in his mind, disappeared the two intervening cars and had created a story that made him halfway responsible for the accident. Because he is responsible for everything, in his world view. Of course (and lucky for his insurance premiums) his story was demolished on the witness stand because they had the immediate accident report and other witnesses. That story stands in my mind about how much memory can shape an event to conform to our basic idea of self and world. That guy was a pro in the field of witnessing of events and he had nothing to gain by making himself more culpable than he really was. But his pre-existing mind structure exerted a gravitational pull, and reconfigured the event so that it stayed in his world.

So these days, I am trying to leave behind the gravitational field generated by the structure of my own world view. Its pretty exciting. Burns a lot of fuel though.